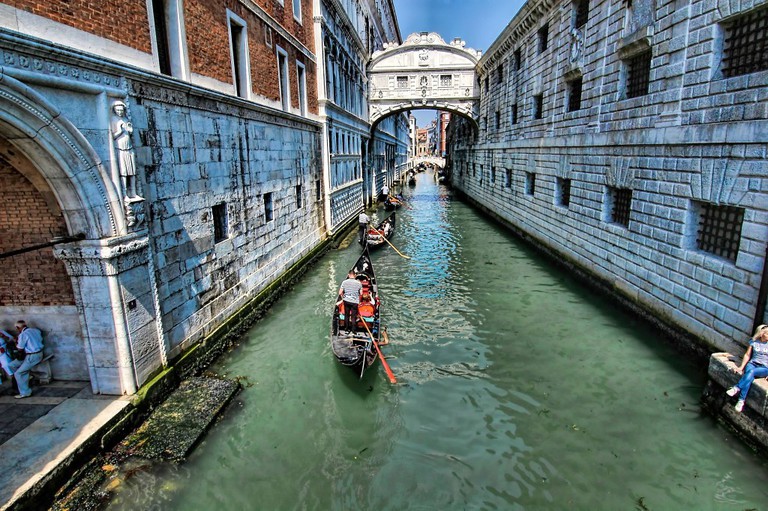 The Bridge of Sighs, Venice | © Oliver Clarke/Flickr
Designed in 1600 by Italian architect Antonio Contino, The Bridge of Sighs is one of the most iconic of Venice’s 400-plus bridges. Officially the Ponte dei Sospiri, the bridge apparently got its English name after Lord Byron referred to it as such in his epic, four-part poem Childe Harold’s Pilgrimage. Despite its beautiful, Baroque style and romantic exterior belies its original purpose — to transport prisoners between the Doge Palace and its new prison cells across the Rio di Palazzo. Nowadays, there’s a much nicer story behind the bridge. Legend has it if couples share a kiss underneath The Bridge of Sighs, their love will last forever.
The Bridge of Sighs. This corridor leads over the Bridge of Sighs, built in 1614 to link the Doge’s Palace to the structure intended to house the New Prisons. Enclosed and covered on all sides, the bridge contains two separate corridors that run next to each other. That which visitors use today linked the Prisons to the chambers of the Magistrato alle Leggi and the Quarantia Criminal; the other linked the prisons to the State Advocacy rooms and the Parlatorio. Both corridors are linked to the service staircase that leads from the ground floor cells of the Pozzi to the roof cells of the Piombi. The famous name of the bridge dates from the Romantic period and was supposed to refer to the sighs of prisoners who, passing from the courtroom to the cell in which they would serve their sentence, took a last look at freedom as they glimpsed the lagoon and San Giorgio through the small windows.https://palazzoducale.visitmuve.it/en/the-museum/layout-and-collections/prisons/
https://veniceevents.com/news-blogs/story-bridge-sighs
https://www.visit-venice-italy.com/bridges-venice/bridge-of-sighs-venice-italy-ponte-sospiri.htm