Chili- A bit of History

Today in the United States, chile con carne is usually a combination of beans, sauce and ground beef. It can be made at home, selected from restaurant menus or purchased (ready-made or in kits) from food stores. Dedicated southwestern chili afficionados concentrate on spices, not the meat. Unless? Of course, they live in Texas.

"Chili con carne sounds authentically Spanish, which it could hardly be, for the Spaniards had never seen a chili before they reached America; it was an element of Indian, not of Spanish, cooking. The Spanish name could have been explained by a Mexican origin, but the only persons who deny that provenance more vehemently than the Texans, who claim credit for it, are the Mexicans, who deny paternity with something like indignation...This dish is believed to have been invented in the city of San Antonio some time after the Civil War; it grew in favor after the developement of chili powder in New Braunfels in 1902."
---Eating in America: A History, Waverly Root and Richard De Rochemont [William Morrow:New York] 1976 (p. 277-8)

"Instinctively, one knows that chili originated in the Southwest, was of Mexican inspiration, and that it moved eastward to the southern states in the early part of the century. Although American Indians used for one dish or another such chilies as could be found in various parts of America, chili con carne was not an Indian invention. Carolyn Niethammer, in her book American Indian Food and Lore, states that the tiny round chili called chillipiquin was known in New Mexico and Arizona, but the Indians did not know the large, domesticated chilies such as those used in chili con carne "until the Spaniards brought them [here] after passing through Mexico." The late Frank X. Tolbert, perhaps the nation's leading historian on the subject of chili, indicates in his book, A Bowl of Red, his assurance that chili originated in San Antonio, Texas."
---Craig Claiborne's The New York Times Food Encyclopedia, compiled by Joan Whitman [Times Books:New York] 1985 (p. 88) 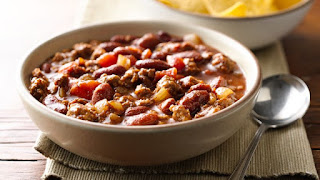 "Chili con carne is a stew that consists of meat, hot chile peppers, a liquid such as water or broth, and spices. It may or may not contain such ingredients as onions, tomatoes, or beans. Everything about chili con carne generates some sort of controversy- the spelling of the name, the origin of the dish, the proper ingredients for a great recipe...Although archaeological evidence indicates that chile peppers evolved in Mexico and South America, most writers on the subject state flatly that chili did not orginate in Mexico. Even Mexico disclaims chili; one Mexican dictionary defines it as: "A detestable dish sold from Texas to New York City and errouneously described as Mexican." Despite such protestations, the combiantion of meat and chile peppers in stew-like concoctions is not uncommon in Mexican cooking...Mexican caldillos (thick soups or stews), moles (meaning "mixture"), and adobos (thick sauces) often resemble chili con carne in both appearance and taste because they all sometimes use similar ingredients: various types of chiles combined with meat (usually beef), onions, garlic, cumin, and occasionally tomatoes. But chili con carne fanatics tell strange tales about the possible origin of chili. The story of the "lady in blue" tells of Sister Mary of Agreda, a Spanish nun in the early 1600s who never left her convent in Spain but nonetheless had out-of-body experiences during which her spirit would be transported across the Atlantic to preach Christianity to the Indians. After one of the return trips, her spirit wrote down the first recipe for chili con carne, which the Indians gage her: chile peppers, venison, onions, and tomatoes. An only slightly less fanciful account suggests that Canary Islanders, transplanted to San Antonio as early as 1723, used local peppers nad wild onions combined with various meats to create early chili combinations. E. De Grolyer...believed that Texas chili con carne had its origins as the "pemmican of the Southwest" in the late 1840s...The most likely explanation for the origin of chili con carne in Texas comes from the heritage of Mexican food combined with the rigors of life on the Texas frontier. Most historians agree that the earliest written description of chili came from J.C. Clopper, who lived near Houston. Hew worte of visiting San Antonio in 1828: "When they [poor fmailies of San Antonio] have to lay for their meat in the market, a very little is made to suffice for the family; it is generally cut into a kind of hash with nearly as many peppers as there are pieces of meat--this is all stewed together." Except for this one quote, which does not mention the dish by name, historians of heat can find no documented evidence of chili in Texas before 1880. Around that time in San Antonio, a municipal market--El Mercado--was operating in Military Plaza. Historian Charles Ramsdell noted that "the first rickety chili stands" were set up in this marketplace, with bols o'red sold by women who were called "chili queens."...A bowl o'red cost visitors like O. Henry and William Jennings Bryan a mere dime and was served with bread and a glass of water...The fame of chili con carne began to spread and the dish soon became a major tourist attraction...At the World's Fair in Chicago in 1893, a bowl o'red was availabe at the "San Antonio Chili Stand."