By Cherylann April 03, 2020
This follows along with my theme from yesterday. It is the most important step we can take to make diversity a reason for celebration not condemnation!
We have all met the haters, the ones who are vocal in their dislike and those that are not. Indeed all of us hate something but to hate based on race, age, religion or physical abilities is stupid.
Since killing the bigots is just another form of hate it is not an option. So what can we do?
Well since bigotry starts at home you need to start teaching children the minute they enter the education system that everybody is beautiful & has something to contribute. While this may not counteract the negativity at home it does give the children something to compare it to and a choice. Hate is always a choice! 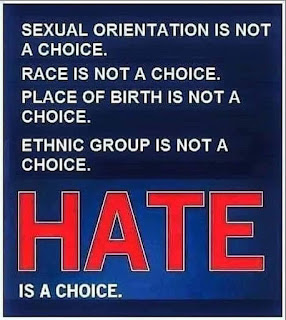 There is another form of hate that is insidious and which causes a lot more damage to my mind. Yeah I'm talking about self-hate. Most of you know it in some form or another.
Did you know that most self-hate starts with a single careless comment from someone who we revere? It isn't only our parents or other relatives that put it there sometimes it is the beloved teacher or the sweet neighbour. What is worse sometimes you don't notice the impact it had on you until many years later. I said it was insidious, didn't I?
One of those moments happened to me when I was about four. I was best friends with my cousin who lived just down the hill from me. One day I went to borrow her trike for a quick run around the yard. It was in her step-fathers' workroom and it was hung up high so I asked him if I could use it, after all, she had said it was ok. His reply bout killed me figuratively speaking. All he said was "No, you break everything you touch".
It was a verbal slap upside the head and even today I can still feel the hurt in my heart at his words. It was about then that I stopped playing with toys and began reading, you can't break a book after all. For years I refused to play with toys because I was afraid I'd break them. It also had long-reaching consequences eventually when I did get a bike of my own I drove it into a tree the first time I tried to ride it. That just reinforced the negative thoughts I had about my own abilities. Even today when something I tried to do doesn't turn out I get that thought only these days it has morphed into "I can't do anything right" or "I screw up everything I touch".
There is only one way to fight back against that monster every time something turns out well I celebrate. I allow myself to feel that awesome feeling called accomplishment!
Do you have a memory that haunts you like that? Please share it with me in the comments below.