On January 8, 1981, Joan E. White of Syracuse, New York, was reading the newspaper when she came across a story about a California couple who offered to worry for others in exchange for a fee. White believed this approach to facing the world's problems was flawed and decided to create an organization to counteract the worriers. She founded Joygerms Unlimited and designated January 8 as Joygerm Day, on what also happened to be her late mother Nora's birthday.
Shortly after forming Joygerms Unlimited, White began responding to requests from people asking to join the group; she allowed people to join free of charge, as long as they sent her a self-addressed, stamped envelope. Although Joygerms Day was unofficially first held on January 8, 1981, when the idea for it and Joygerms Unlimited came about, it didn't become a "national" day until 1985.
The goal of the day is to "smile, hug, grin, and win over at least one grumpy grouch." It is a day to spread cheer through "germs of joy." It is a time for positivity, optimism, smiles, and kindness to everyone that one comes into contact with. Some celebrants, often members of Joygerms Unlimited, have gone to nursing homes and hospitals to spread cheer. Parades have also been held on the day. It is not seen as a day to ignore life's problems, but rather, a day to rise above them.
As of 2018, the creator of the day is in her eighties and still spreading joy. Over the years she has talked about the holiday she created on The Phil Donahue Show and in Family Circle magazine. There are now well over 100,000 official members in Joygerms Unlimited, living in all fifty states and in various countries around the world. 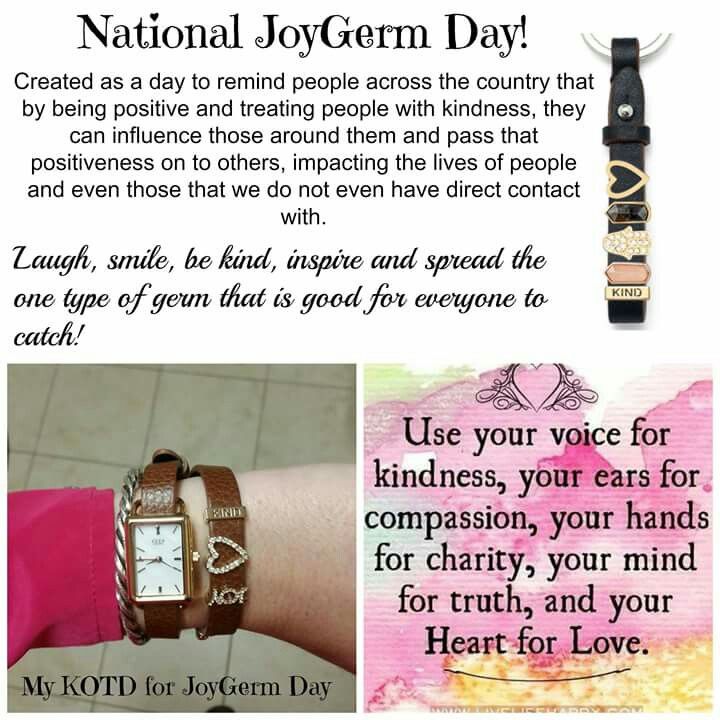 Celebrate the day by becoming a "joygerm carrier." Radiate positivity, kindness, courtesy, and optimism to others. Smile and give others encouragement. It may especially be fitting to share joygerms with the lonely, sick, and aged. To become an official member of Joygerms Unlimited, send a self-addressed, stamped envelope to:
Alternatively, you can send her an email instead.
This story Courtesy of Checkiday