Created in 2002 by Jodi Jill, a syndicated newspaper puzzle maker, National Puzzle Day is a day when people come together to play and enjoy puzzles and "reflect on those puzzles, games and even challenges in life that we embrace every day but sometimes take for granted." Teachers are also known to use puzzles in their classrooms on the day, and Jodi Jill has even created lesson plans and puzzles for it.
Puzzles may be done for the pure enjoyment of figuring them out or taking on a challenge, to learn new words, or just to pass the time or stave off boredom. They may also be done to sharpen the mind, as they may improve cognitive and problem-solving skills. They have many benefits to the mind and may help improve memory and help with the avoidance of Alzheimer's and dementia.
Anyone can use puzzles, from young children to the elderly, from the low-skilled to experts. And there are many types of puzzles. Common types include picture puzzles, also known as jigsaw puzzles; word puzzles like crossword puzzles and word-search puzzles; and number and logic puzzles like Sudoku. They can be for entertainment purposes or can be serious, testing ingenuity or knowledge.
Puzzles go back centuries. The word "puzzle" dates back to 1595 when it was used in a book as a verb to describe a new type of game; afterward, it became used as a noun. The word comes from pusle which means "bewilder" or "confound." It wasn't until the mid-nineteenth century when the word started being applied to a toy used to test ingenuity.
One of the most popular puzzles, the jigsaw puzzle, was invented in the 1760s by John Spilsbury, a British engraver and cartographer. He mounted a map on a sheet of wood and sawed around each individual country on it, subsequently using it to help him teach geography. Until about 1820, this was the primary purpose of puzzles. Another type of puzzle, the crossword, debuted in the early twentieth century, when magazines and newspapers began featuring puzzle contests, with the goal of increasing readership. In more recent years, Sudoku has become popular in newspapers. 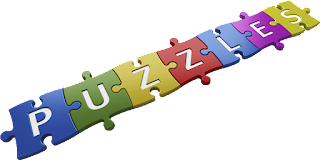 Celebrate the day with all types of puzzles! Here are some ideas on how to spend the day: