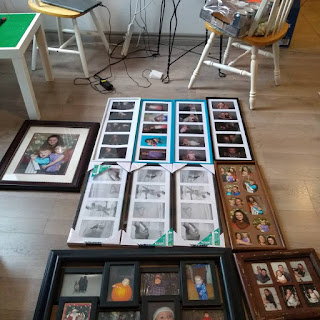 So these are the frames I have. There is one more on the wall I can't get to that holds 20 cameos.

I have 8 grandchildren and each will get their own frame. They will go in the 5 & 4 rectangle ones. I have only one picture of number 8 so I don't have a four for her yet.

The biggest frame will hold a group picture of as many of them as I can get in one place at one time and will probably form the centre of the wall.

It is possible I will have to replace one of the 5's because it has a broken corner but I am not sure yet and the cameo one in the bottom right is in pretty bad shape. As it is to be a full wall I am also thinking about adding the family crest & the one award I have plus some word art. I am not entirely sure how big the total display will be which is why I'm using my second biggest wall for it.

There is a small wall catty-corner from the wall I will be using that currently holds a knick-knack shelf & artwork from 6 of my grandchildren. I have a second knick-knack shelf I want to put up on that wall but to do so I have to rearrange what is already there. Most especially the present shelf needs to be moved over at least about half a metre maybe a bit more. There is a metre on one side of it and 2/3 of one on the other side. The second shelf if put in either of these places would cause a very unbalanced view. As a Libra, I am fond of balance. This wall is also quite small compared to the one the photo gallery is going on

But then I always have more ideas than I have time or energy to implement. I hope to have the photo wall completed by January but winter is coming and I am already feeling it so we will see.