The Legoland in Billund, Denmark was the first of six theme parks based around the Lego interlocking plastic bricks. Billund is the home of The Lego Group.
Can you believe it the first Legoland is 51 years old? Sometimes it is hard to remember that the first true lego block was marketed in 1949. It's truly amazing to think that this most practical child's toy is 70 years old this year.

I have known about lego for a long time but had had no real interaction with it until last year. With a cross-section of Grandchildren from 19 to 3, I wanted something they could all play with when they came to visit and that would allow them to develop their imagination. As a creative person myself that last was very important to me after all imagination is the basis of creativity.

I searched for the earliest set made by lego but could only find a reference to this one which was released with two others in 1954. 1954 is the first year these interlocking bricks were called Lego before that they had another name, "The Automatic Binding Brick". I won't go into the full history here if you want to read more about how, when & where Lego came from check out the link above. 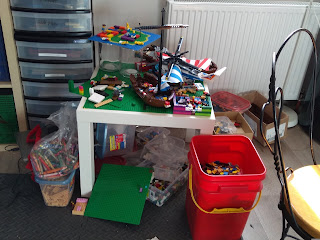 This is my Lego area. The table has four fixed plates on it the same size as the one beneath. In the upper 6 drawers in that cupboard next to the play area are more bricks of various types. Right now a lot of them are mixed together in that big red bucket because keeping them separated into same type blocks is a lot of work and sometimes at the end of the day I just don't have the energy to sort them.

Each child has a different style for playing with Lego though only one seems to have a real interest in the building aspect. It doesn't matter it gives them something to do that they enjoy doing when they visit Nana Cheryl. They all enjoy it so much that we have taken two to Legoland already and will be taking the other three this year at their request.

Oh and if you have been around for a while you know that I like to play with them too but true to my preferences I build what they call habitats for Lego figures and miniature scenes. Though I have tried other forms as well including the straight building of vehicles and houses and mosaics they just don't interest me as much.

If you have a small creative space I suggest you give Lego a try, it really is a creative toy for kids & adults both. And one $30 set can give you hours of creative fun. Just remember the biggest plus of playing with Lego, you can take a picture of what you've made then tear it apart to build something entirely new.