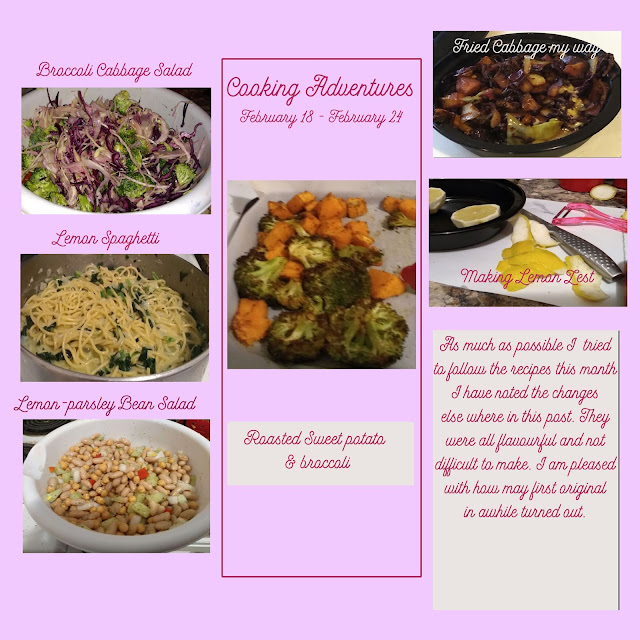 Broccoli Cabbage Salad- I followed the recipe on this one and while it turned out ok I think it would have benefited from a different dressing. In my opinion, the oil & vinegar dressing just didn't do anything for the taste, in fact, the vinegar masked it a lot.

Lemon Spaghetti- I was raised by a very plain cook who used tomato soup to flavour her spaghetti and until recently I thought there were only two other ways to top spaghetti with spaghetti sauce or alfredo sauce. I've been wanting to try other sauces and this cook-in-sauce was so good that I intend to make it again. I cooked it with spinach this time as per the recipe but I think it would taste just as good without it.

Lemon-Parsley Bean Salad- It looks kind of white doesn't it? That was a choice I made in the preparation. I had red kidney beans & I had white kidney beans and I chose to use the white because I like the red in chili and I have it on my menu for next month. Because I didn't use the red kidney beans I added a bit of sweet red pepper to give it some colour. The only other vegetables in this are cucumber & onions. I must admit when I ate it for supper the day I made it it didn't taste like much but after sitting in the lemon dressing for a couple of days it was fabulous. Add the salt and pepper before you refrigerate it though, I didn't and I regretted it.

Roasted Sweet Potato & Broccoli- I screwed up on the seasonings for this so it was considerably spicier than it was supposed to be but I liked the taste & it paired well with the blander bean salad. I will try again I think but this time I'll pay closer attention to which measuring spoon I am using. I ended up putting in half tablespoons instead of half teaspoons.

Fried Cabbage My Way- I have been looking at this picture for several weeks and I wanted to try it.

Then the other day I was making potato hash for breakfast and instead of adding eggs I added the cabbage that was left over from the salad and I ended up with this. It actually tasted pretty good and I think I will try to make fried cabbage again, this time following the recipe so I can compare the flavours.

Lemon Zest- as you know to buy this stuff is really expensive so I have been trying to find a way to make my own. Turns out there are a couple of ways.

The method pictured above is perhaps the most tedious but it eliminates the lemon juice everywhere mess when using a grater. Especially if you are silly like me & cut it in half before use the grater on it.

Basically using a vegetable peeler peel the lemon making your cuts as shallow as possible. The white stuff makes the lemon peel bitter if its left on.

The next step is to take your sharpest knife and remove as much of the white stuff as you can.

From here you have two choices, you can use a food processor to grind it into bitty pieces or you can use a knife to chop the peels into thin stripes and the small stripes into teeny cubes.

You can use it right away or leave it on a tray near something warm to dry out. Either way, it needs to be stored in a closed jar of some sort to help it keep its flavour.