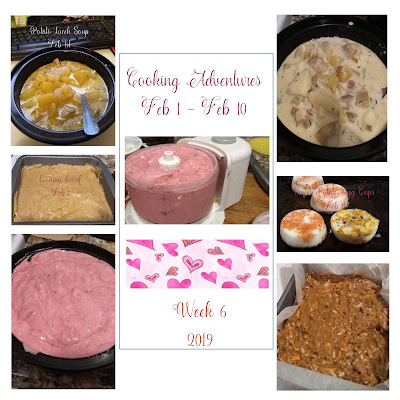 February 1
Home-made Potato Leek Soup to celebrate Imbolc. The only change I made was instead of using white potatoes and yellow onions I used yellow potatoes & red onion. It tasted great and I had forgotten how much I used to like leeks. This one is super easy if you don't have leeks just add a whole onion instead of only a half cup, it will have a slightly stronger onion taste but that isn't a bad thing. If you don't have half & half cream use a 7/8 cup milk & 1 Tbsp unsalted butter, if you use low fat milk add a tsp or so of flour to thicken it up a bit

Lemon Loaf. To begin with, I didn't have a loaf pan so I used a 9 x 9 cake pan. I made my own lemon zest and am still having trouble with that white pith but I did better with the lemons then I did with the grapefruit last month. I switched white sugar with coconut sugar, it made the base a little bit thicker than usual but it tasted great and it is better for me. Instead of half a cup of milk I used a quarter cup of half & half cream because I had it out for the soup and thinned it by adding a quarter cup of water. The recipe wasn't clear as to when to add the half a lemon of juice so I added it to the mix just before I put it in the baking pan. Other than my ongoing issue with the pith on the citrus rinds it turned out pretty good and it wasn't as bitter as the grapefruit cake from last month, that's progress I think

Feb 2nd
Sweet Potato Hash Egg Cups. I've made egg cups before and they always taste great, these were no exception.

Feb 4
Easy Carrot Cake does not taste nor have the texture I expected it to have. I substituted coconut sugar for white sugar and I am finding it adds a different texture than white sugar, I think I may have to start adding honey to replace the sugar as I am not happy with the results. Instead of the moist cake I expected it is crispy. Not a bad thing but is obviously not what I was trying to make. Will maybe try again later in the month.

Feb 9
Healthy Frozen Yogurt so easy though I wish I'd done it in my blender rather than my food processor, the food processor was just not big enough to do it in one batch but YUM easy and a great substitute for when you are craving ice cream.

Homemade Clam Chowder. I added a little too much cayenne so it was a bit spicier than it should have been but other than that it turned out ok. Next time though two cans of clams and a whole lot more potatoes I think. I ended up being able to have it for two meals and still froze four servings. This recipe makes a lot even though you wouldn't think so.