Where did barbie come from?

By Cherylann March 09, 2020
On March 9, 1959, Barbie made her debut at the American International Toy Fair in New York City. The date became known as Barbie's birthday and is now also celebrated as Barbie Day. Barbie was thought up by Ruth Handler, wife of one of Mattel's founders, Elliot Handler. Handler noticed her daughter, Barbara, gave adult roles to paper dolls when she played with them. In 1956, Handler bought three German Lilli Dolls while vacationing in Switzerland, and used them as inspiration in creating the Barbie doll upon returning back to California.
Barbie made her debut in stores on September 6. The first Barbie wore a black and white swimsuit, had the full name of Barbara Millicent Roberts, and was available with either blonde or brunette hair. Her cost was $3.00, which is about the equivalent of $26.00 in 2019. Over the years, Barbie has been seen as a positive inspiration to girls by demonstrating the many careers that young girls could pursue. But, Barbie has not been without controversy, and many have been critical of the doll's unrealistic body shape. Over one billion Barbie dolls have been sold since they made their debut, and Barbie has become an American cultural icon.
Barbie Day could be celebrated by taking out your old Barbie dolls. If you have children this may be a good day to show the dolls to them or to talk to them about the dolls. You could go out and buy a new Barbie. If you are a diehard Barbie fan, you could plan a trip to Canada to visit Montreal's Barbie museum or the Legacy Doll Museum in Montana.  Source What the story doesn't tell you is that Lilli was based on a cartoon of a high-end call girl. Barbie actually started out life in the late 1940s as a German cartoon character created by artist Reinhard Beuthien for the Hamburg-based tabloid, Bild-Zeitung. The comic strip character was known as “Bild Lilli”, a post-war gold-digging buxom broad who got by in life seducing wealthy male suitors.

She was famously quick-witted and known to talk back when it came to male authority. In one cartoon, Lilli is warned by a policeman for illegally wearing a bikini out on the sidewalk. Lilli responds, “Oh, and in your opinion, what part should I take off?” Source

I like this broad and wish I could read German so I could know what she is saying in those comics!

Today I am looking over my altered barbies, the elemental ones anyway. Fire by far turned out the best and air is not far behind, though she does need to have her wings stiffened somehow. Earth needs a complete make-over as I rushed and botched her horribly. Water is also giving me issues though not in quite the same way. The base colour is ok and the silver sparkle looks like scales but it needs something more some kind of waveform and fish or shells or something to be complete. I am looking up options to see if I can find something I can recreate. 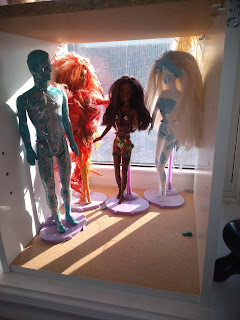 By Cherylann February 11, 2019
I am not very good at making friends or keeping them it seems. I do not go outside much, in fact I hardly leave my home unless it is family related. That makes it hard especially since friends expect you to come to them at least once in a while and I find I can't. If it were simply a matter of laziness it would be understandable but it isn't. Some days I can't even open the door to let in some fresh air. I do not know where the fear comes from I just know that that is what I feel when I think about going outside most of the time. Agoraphobia: Triggers for this anxiety may include wide-open spaces, crowds (social anxiety), or traveling (even short distances). Agoraphobia is often, but not always, compounded by a  fear  of social embarrassment, as the agoraphobic  fears  the onset of a panic attack and appearing distraught in public. Causes: Genetic and environmental factors Symptoms: Anxiety in situations perceived to be unsafe, panic attacks Treatment:
3 comments
Read more