Why do we walk around things?

By Cook, Make, Think April 04, 2019
It is an honest question. I am not talking about walking around physical objects there are always real reasons to do that. Walking around emotional issues that's a very different thing.

I made a mistake not so long ago that will haunt me for a long time. I was sharing some quality time with GD#3 and we were looking at pictures of her dad. I allowed myself to forget I was talking to a six-year-old and I told her some of the true stories of her dad in his younger years. I was unprepared for her reaction to what I said. I forgot who I was talking to, her older sister GD#2 was who I was thinking of as I talked.

My son was not always the upstanding citizen he is now. He was well into his twenties the last time he got in trouble and went to jail. Anyone who knows him knows this but for his last three children, GD#3 being the oldest of these, it is a major shock. He has been a hard working man since his late 20's because he did not want to go back to jail and he has mad skills with building repair and renovation which have stood him in good stead.

When GD#3 began to cry I had no idea why. I knew what I said to upset her but I didn't understand her, to me, extreme reaction. Again I had forgotten she was only six. We called her mom and had her come and get her. I showed her some pictures of GD#2 when she was little with her little brother and she eventually settled down, at least until her mother got here.

I explained to her mother what had happened on the way back to my apartment from the front door. GD#2 threw down the gauntlet as soon as her mother got inside. She was even more shocked when she found out that not only did her mother know but so did her step-dad and Sis sis (GD#2). I think she felt betrayed at that point because everyone knew "the secret" but her.

Her mother went into listening mode and managed to get to the root of the issue. Because her dad had been in jail for selling drugs (yes I went there, I told you I screwed up), that made him a "bad guy".

I can not fathom how much emotional pain she must be in to find out her hero was no such thing. The guilt I feel is only increased by the fact that her mother seems to not be angry at me for spilling the beans. But then I feel like I'm buried under a ton of guilt for destroying this precious girl's rosy view of life thus punishing myself more than anyone else could.

I should have been more careful in my words, I should have found different words to describe him to her. Sometimes you have to walk around a subject especially if you don't want to cause emotional harm as I have done. I should have walked around the dark side of his history by answering her questions less honestly.

That is why we walk around painful things, it is one way to prevent emotional damage to others. Some times we do it to protect ourselves from unhappy events as well. What secrets do you walk around? 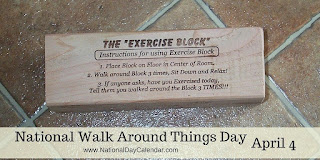 By Cherylann January 26, 2019
That is the first line of a poem that I heard long ago. I am not sure who wrote it or even if I am quoting it right.

I think a prince is supposed to refer to the storekeepers and such who ate three course instead of the 10- 12 courses a king would have at that time. I think it was written in the 1500's

After a little research I found that it was made popular by Adelle Davis in her weight loss book "Lets Get Well", but she only used "Breakfast like a king, lunch like a prince and dine like a pauper". I know I have seen that quote as written above elsewhere but danged if I can remember it now. All good sound advice considering she wrote that book in 1965

What it basically says is eat a large meal when you break your fast in the morning, a mid-size lunch and a tiny supper and you will become healthy, rich and smart.