What's on the Menu- Part 3 continued 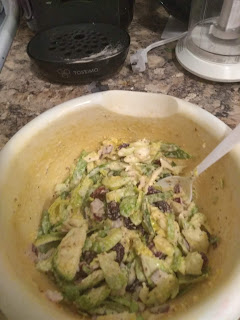 I also finished the Grapefruit bars. I decided they and the slaw can be my supper for tonight and the buddah bowl & the broiled grapefruit I would make another day for breakfast & lunch.

The slaw turned out very nice and is another dish I will consider making again. Just the right combination of sweet and tart.

The bars not so much but that was my fault. I didn't have grapefruit zest and had no idea how to make it so I cut the peel into strips  & then into cubes and used that. The white stuff wasn't supposed to be included so the bites were a little bitter. Mostly though all I could taste was crust. I do want to try again only with proper zest. Not badly gone wrong but not quite right either. I will try this again maybe later in the month now that I've found out how to create a zest from scratch. 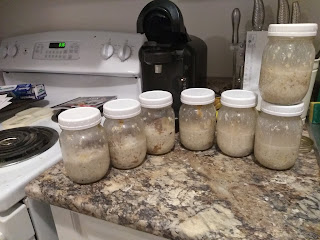 On Tuesday I slept most of the day as I mentioned but round 8 pm I decided to try my hand at a batch of overnight oats. I made a set of Chunky Monkey Overnight Oats. I substituted coconut sugar for the honey but that is the only change I made.

Tried one for breakfast this morning and was very pleased with the results. This is breakfast for the rest of the week 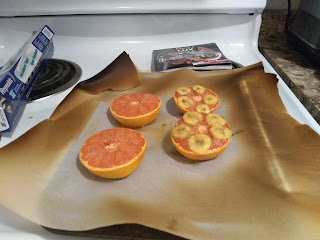 Today I gave broiled grapefruit a shot. I ended up having two halves for lunch. I have to admit they tasted pretty good and were not nearly as bitter as I remember them being.

Note to self: the easiest way to eat them is to turn the grapefruit inside out and eat it like an apple, so remember to loosen the outer edge as well as the sections before serving.

That's it for this week, next week we discuss what to do with the extras and I may have a couple of new cooking adventures for you.