We are barely two days in and it's been crazy!

All five of the littles stopped in for a bit yesterday and the older two added some more buildings to my advent calendar and it has become a nice size village. I haven't added any people yet but they are coming I have a large bag of minifigs so I'll be placing them around the village. I wish I had a proper Santa figure but the one I made up will work just fine. 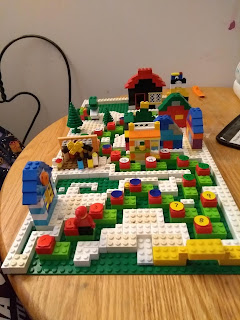 I figure since I have them I might as well make along with the kids so that is what I'm doing.

I suppose I should tell you that Lego building blocks are going to feature often in these posts for the near future at least. I have not had much opportunity to play with them. I never even knew they existed until I was an adult with children of my own so I am enjoying playing with them. Me being me I will be sharing stories about my lego adventures as well as cooking and needlework. As the year progresses you might even find some knitting and hand sewing of things besides quilt blocks.

I also have a surprise for the crafty ones ... my mom collected two sets of cards of the month, one is recipes and the other is crafts. I will be scanning the crafts one for my grand-daughters and I figured I'd share them here as well. I may even share the odd recipe card. Since both these sets are from the '60s and '70s they contain things that may have been long forgotten. I hope you will enjoy them.

I have chosen the fabrics and design for my December square but am not sure rather I will do another similar to the November one embroidery wise yet. It was a quite involved design. The three that look almost black are dark green.


Yesterday the professor brought me some fake flowers that I had left at his house years ago so I put them to use. I had a wreath form that I had found at one of the thrift shops I go to and I decided instead of turning it into a fabric wreath like it was meant to be I'd use the flowers and hang it on my door. It turned out pretty good if I do say so myself. Though after looking at this picture I rotated it so the longer bits would be facing the floor rather than at the top like that. 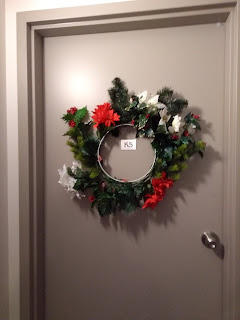 One last thing, I received a gift from one set of my grandchildren yesterday and I just have to share cause it is so sweet! That's my tree behind it. It is not completely decorated yet but it is getting there. 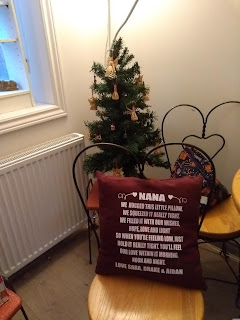